A wedding marks a before and after in the lives of people. Not only for the grooms, but also for their families and friends. Beyond what it implies from the emotional point of view, the fact of marrying also generates a social impact. Indeed, the emergence of social networks has made this impact to become exponential. And more, in the cases of famous people. One of the last examples has been the wedding of Italian influencer Chiara Ferragni and rapper Federico Leonardo Lucia, better known as Fedez.

(…) during the 3 days that the party lasted, the photographs uploaded (…) generated more than 67 million interactions. 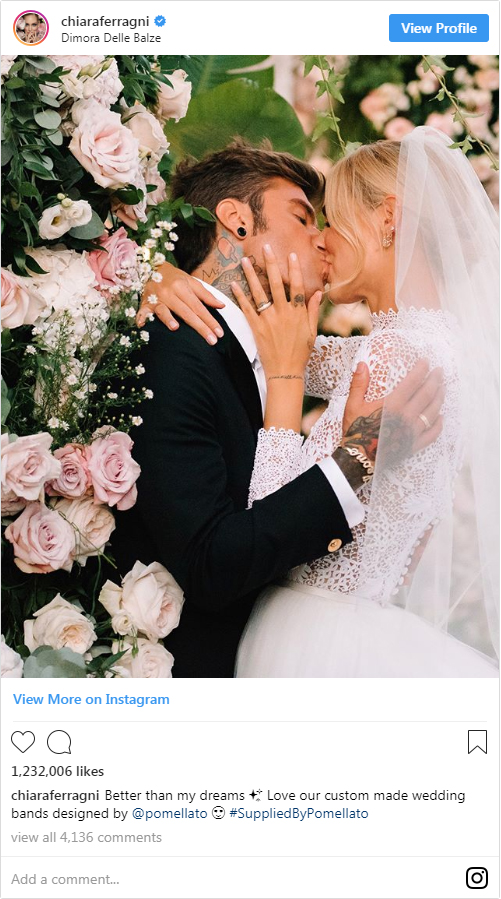 Converted into a whole social event – between the two they accumulate more than 22 million followers on Instagram -, the party was labeled in the social networks as #TheFerragnez and this has allowed to analyze the impact that it had. In particular, during the 3 days that the party lasted, the photographs uploaded with this label generated more than 67 million interactions. What in technical language are known as “engagements”.

The media value of the images related to the wedding is estimated at € 31 million.

This movement in social networks also has an economic translation. The media value of the images related to the wedding is estimated at € 31 million. To calculate this figure, the revenue generated by the media and the social networks that are nurtured by this type of content are taken into account. But you must also take into account the profits from all of the brands that are behind the wedding. In this particular case, Dior has been one of the most beneficial for having made the brides wedding dress.

An example that serves to have another perspective on what is behind a wedding and the role that social networks play – and they can definitely play – and that it is rising.