There is one of Mas Terrats plants that has a special significance. It’s the Barbary Fig. An American native plant  that has become habitual to the Mediterranean littoral. Actually, the Barbary Fig is an edible plant that you can practically find everywhere around the country.

Tomeu was one of those thousands of young boys forced to go to war.

The one that you can find at Mas Terrats is, somehow, a homage to survival. This Barbary Fig actually has a name and has been planted on purpose a few years ago. A plant in memory of Tomeu – the house family’s grandfather – that after the Spanish Civil War had to recover to this figs to be able to survive. Tomeu was one of those thousands of young boys forced to go to war. 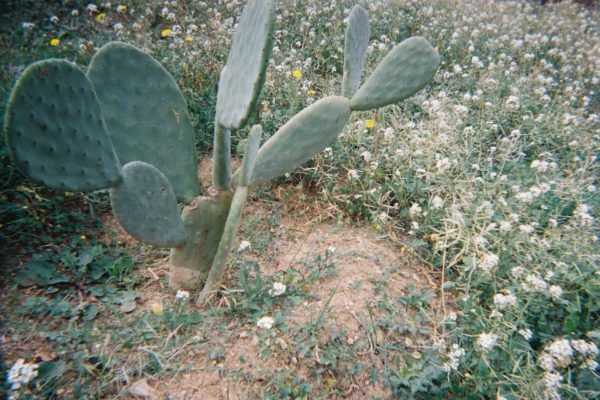 With just 17 years old, he had to leave his family to go to the front in such extreme conditions – cold and famine – which caused that Tomeu would return home ill and malnourished. The figs are picked up from the end of summer until the first cold signs of autumn. This fruits have to be picked up with special gloves to avoid the spines that are distributed all around the plant.

The figs have to be picked up with special gloves to avoid the spines that are distributed all around the plant.

Once you have them peeled, they are eaten fresh, but they can also be used to make syrups and soups. After the Spanish Civil War it was usual that most of the population take advantage of this fruit to complete the limited food supplies. In some extreme cases, but as last resort, some other fruits would be used, like the acorns of the Oaks, even if these fruits are more indigestibles. These were some difficult times to a lot of families that had to overcome, thanks to what soil had to give.